Maaike Klasen and Renate Cremer are both experienced Agilists. Maaike is an experienced Scrum Master with extensive coaching capabilities who is involved with the International Coaching Federation, as well as working with Scrum.org; Renate Cremer, on the other hand, an Associate Certified Coach (ACC) at Gladwell Academy who also put together the 12-day in-depth Agile Coach course. Together, they’re going to explore the Agile Coaching discipline.

Scrum Mastership is more than master of ceremonies

Maaike: “The Scrum Master role is often approached in a rather basic fashion. It’s the role that’s described most explicitly in the Scrum Guide: ‘responsible for promoting and supporting Scrum’. In practice, many people limit themselves to ensuring that the events take place with all the proper parameters and ceremonies involved. Timebox, designated attendees, et cetera.

That bland skill set is regretfully limited, however. It turns the role into a master of ceremonies – a ‘rules policeman’…! Yet an involved Scrum Master can do so much more… should do much more to increase value of the organization! I became Scrum Master because I saw Agile principles as a way to enhance the way we worked at Schiphol Group, where I work –  but I was already a play therapist and an expert in pedagogy. I’ve gone on to apply many coaching competences in my work as a Scrum Master and my work has benefited so much from that!

One example of Agile Coaching

She continues: “One example. I’m Scrum Master in a team that’s going through a difficult patch – seemingly process-performance-related issues are getting members frustrated with each other. Is this an impediment? You could say so! Is it something for the SM to take on? Of course!

“So I engaged with the members, using skills that are very much part of the Professional Coach competencies  to help them uncover the psychology behind their feelings of unease and to formulate their goal as a team and as individuals to understand the next step(s) to take. Group dynamics, some role taking… turns out there are very human emotions of vulnerability involved, and empathy is a strong antidote. This team is on the mend, recovering their velocity – but I wouldn’t have gotten nearly as far with them without coach training.” 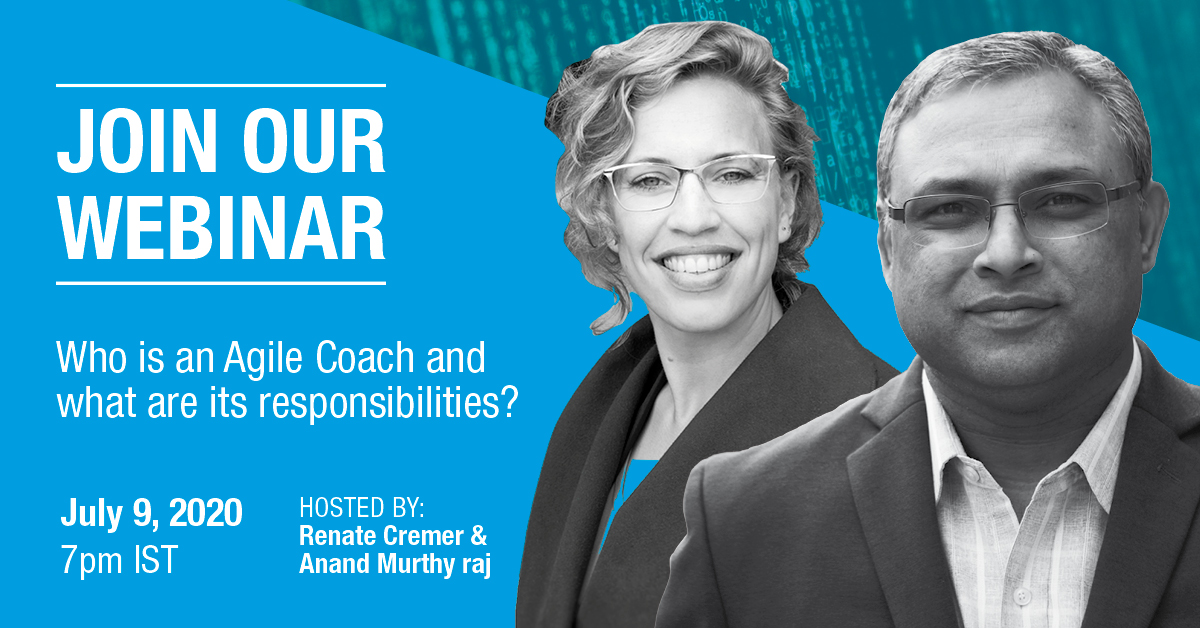 Register for the webinar: Who is an Agile Coach and what are its responsibilities?

Find the pattern behind the problem

Renate: “Maaike’s example clearly describes how she enhances her Scrum Master role by listening to what we call the ‘undercurrent’ in the team. What drives human behavior and how does this materialize in our work environment? While the pre-requisite of the Scrum Master is to have Scrum basics in order, the role means more than just to monitor and facilitate what’s happening on the surface. It’s a crucial aspect of Scrum Master work to be aware of underlying patterns, both in the organization and in its people.

Do you want to become an Agile Coach?
Register now for our Agile Coach Bootcamp course.

We don’t see it as Agile coaching, but it is

It does ask for a different skillset though – to signal and follow the underlying patterns. You might ask yourself why a certain team member reacts in a certain way. Were there triggers before? What is the background story behind interactions within your team? What stories are they telling you?

More importantly, how does team behavior fit into the bigger picture of the organization? Asking such questions and facilitating such conversations can be a real eye-opener for people. It might not feel like coaching, but it is.

Create the circumstances for your team members to take a moment and reflect on their interactions, and to position themselves in the bigger picture of the organization. Rather than hammering on sprint progression in the short term, such exercises allow Scrum Masters to enhance the velocity of the team in the longer term. Moreover, this is how Scrum Master can move beyond ceremonies, to act in service of the broader transformation as well as in the benefit of the individual.”

Do you want to become an Agile Coach?

Gladwell offers an Agile Coach bootcamp course. This course goes deeper into the how and why of Agile and teaches you how to support Agile transformations.

When you visit any web site, it may store or retrieve information on your browser, mostly in the form of cookies. Control your personal Cookie Services here.

Necessary Analytics Marketing Privacy Policy
These cookies are necessary for the website to function and cannot be switched off in our systems.
Technical Cookies
In order to use this website we use the following technically required cookies
WooCommerce
We use WooCommerce as a shopping system. For cart and order processing 2 cookies will be stored. This cookies are strictly necessary and can not be turned off.
These cookies allow us to count visits and traffic sources, so we can measure and improve the performance of our site.
Google Analytics
We track anonymized user information to improve our website.
These cookies are set through our site by our advertising partners.
Google Adwords
We use Adwords to track our Conversions through Google Clicks.
Google Tag Manager
We use Google Tag Manager to monitor our traffic and to help us AB test new features.
Facebook Pixel
We use Facebook to track connections to social media channels.
LinkedIn Pixel
We use Linkedin to track connections with social media channels.
Decline all Services
Accept all Services